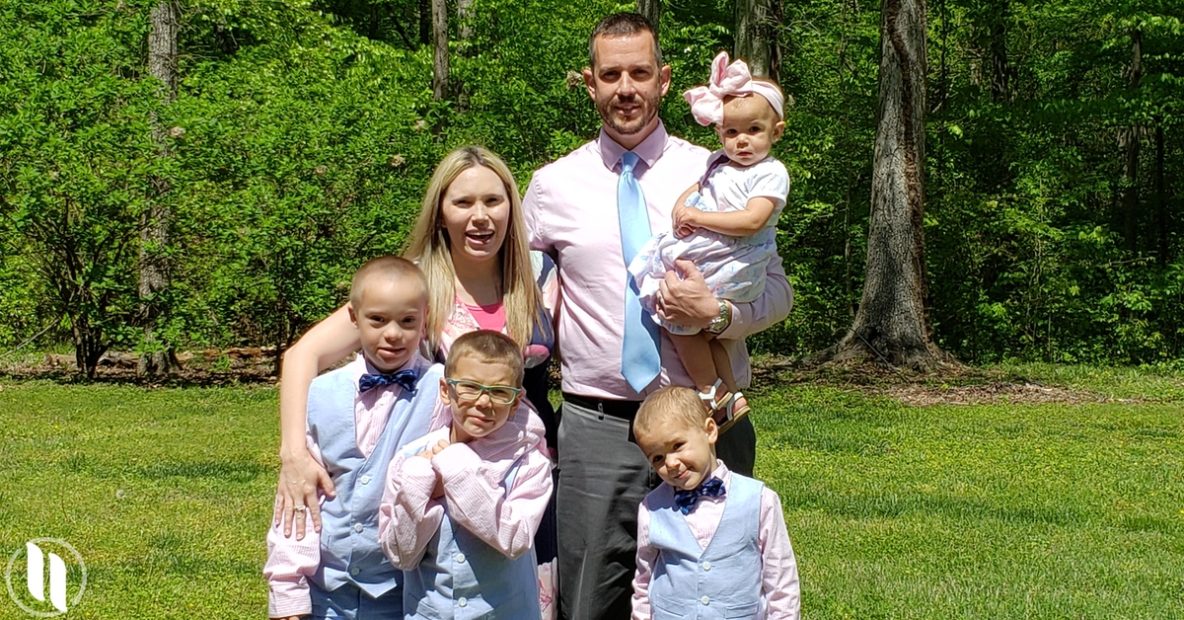 Yes Hayden is the oldest of four.

We had a postnatal diagnosis

Hayden was my first baby, so I was scared and excited, and worried, and so so elated!!! I laboured with Hayden for 20hrs. It was a little rough but we were so happy when he finally got here. When he was born the doctor let me see him for a couple minutes but said he was having trouble breathing on his own and needed to be taken to the nursery so they could help him breath easier, it was very hard for me, a first time mother to let them take him, but I knew it was the best for him.

After he was four hours old they came to us and said Hayden was still not fully breathing on his own so they wanted to keep him under an oxygen mask but that the longest they would allow him to stay under it was at eight hours old and if he wasn’t breathing fully on his own by then he would need to be taken to the NICU. Right after that the pediatrician that we picked out for Hayden, who happened to be my pediatrician when I was a child, came in and said she had been to see Hayden and he was doing good but still needed more time under the oxygen mask, she then got this look on her face and I knew something wasn’t right, she stood there quiet for a couple minutes looking down at the floor and then looked at my husband and I and said ” your child is showing signs of down syndrome, and I’ve looked at your chart and noticed you do not have insurance, and since the medical cost of having a down syndrome child your medical bills are going to be so high you will not be able to pay for my services, you will need to find another pediatrician” she then just turned around and walked out of the door.

My husband and I didnt know what to do at that point we just sat there holding each other crying because we didnt know what else to do or what our future was going to look like. We called everyone we knew and asked them to pray hard for our little boy and by the grace of God at the eight hour mark he was breathing just fine on his own, and they were able to bring him to our room so we could finally hold him. We sat there holding our son and crying for the unknown. There was so many people that came in and out of our room and not one of them congratulated us on our beautiful son but would come in and leave very quietly.

Then a lady came in and handed us some books and info on a down syndrome diagnosis and told us that they were working on finding us a new pediatrician and would let us know, she also said they weren’t positive that Hayden had Down syndrome but by the shape of his eyes he could possibly have it but they would need to do a genetics test and that would take up to two weeks to get the results.

We sat there numb that whole first day not really sure what was going to happen next. Finally someone came in and said they had found us a pediatrician and she also has a child with down syndrome and if we would like for them to contact her and notify her of our situation she could come and speak with us, we immediately jumped at the opportunity to have her come speak with us. So a few hours later a very nice lady came in all smiles and she went right over to Hayden and was loving on him and talking so sweet to him and she introduced herself as a pediatrician and she said that if we would like to have her, she would love to be our pediatrician. We didn’t even have to think twice about it we knew she was the right fit for us.

We were sent home with a care package that had a few books on Down syndrome but I never even picked them up except to put them in the book shelf, I just remember all the titles seemed so gloomy to me,” what to do with a down syndrome diagnosis” “your child has Down syndrome” it was like they were saying you have no hope now this is what your going to have to do. But I never read one word in any of them.

It was very scary, there was so many unknowns we were numb for a little while, we didn’t really know what to do except love on our precious bundle as much as we could

We were contacted by our local Down syndrome network when Hayden was one month old and we started him on occupational therapy, speech, and physical therapy at two months old. Hayden has been very lucky developmentally he has been a little behind but only by about a year maybe two, the one thing he has struggles the most with is his speech.

Hayden was such a good baby, so happy, and loving, and a jokester, he loves playing tricks on everyone!

Haydens biggest challenge is communication. Hayden tends to act out what he is telling us instead of talking, it’s like a very long game of charades. My husband says I’m the queen of charades ?. Hayden is also very stubborn if he decides he doesn’t want to do something or doesn’t want to try at working on certain school things, then he won’t.

I would tell myself not to sweat the small stuff, to always look at the bright side and to never ever give up.

First off congratulations!!! You are know part of the most amazing, wonderful special group of parents, who will always be there to support you. We can always count on each other to be there for the ups and down of this small but mighty community. There will be times of tremendous celebration, and possibly some heartbreaks but know that at anytime if needed we will always be there to support one another.

Your child will show you how to love like no other and to never give up. To always treat your child the way you would treat any child. Every child will progress according to their own abilities, don’t limit your child and don’t discourage them from doing anything, just because society says it can’t be done doesn’t mean it cant happen. Anything is possible if only given a chance. You are you child’s best advocates. If you don’t have high hope’s and big dreams for your child then no one will. Anything can be accomplished, it may take longer, and may be harder, but never give up and say it can’t happen because it can.