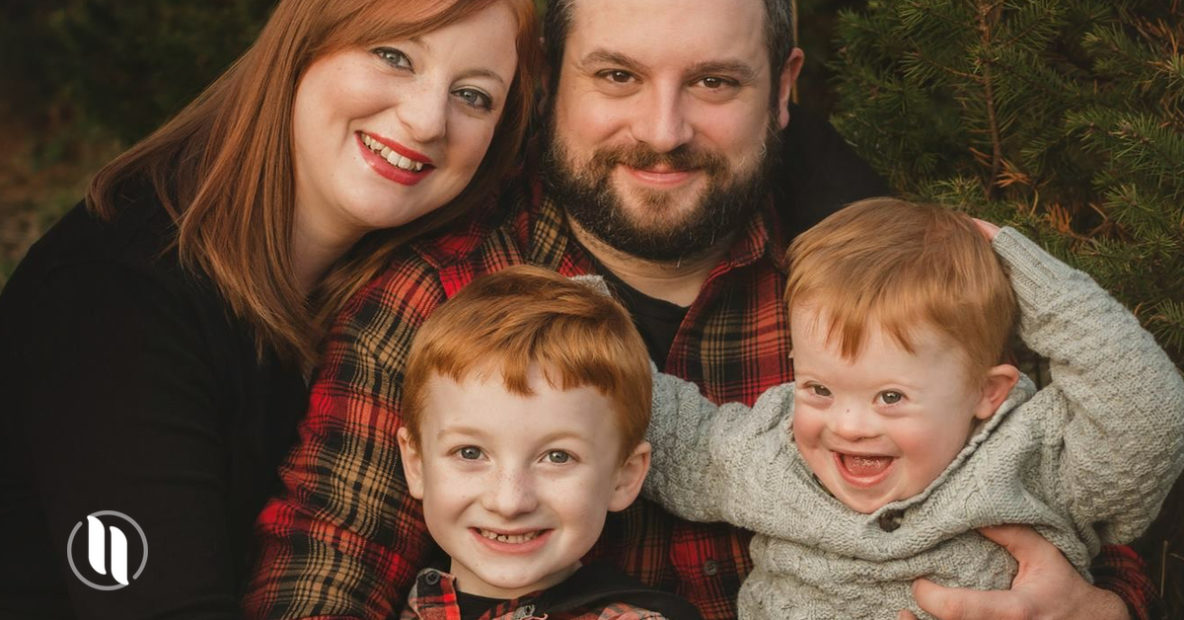 Killian has an older brother, Kayson. He is Killian’s biggest fan and a wonderful helper and teacher.

We had a prenatal diagnosis with Killian when I was about 14 weeks pregnant. I ended up in the emergency room with some complications and when they did an ultrasound, they saw that Killian had extra fluid under his skin. We were sent to Magee Woman’s Hospital for further testing, found out Killian had a cystic hygroma (fluid filled sac) from his skull to his tail bone. We then had a genetic test called a CVS that took cells from my placenta and examined the genetics. Seven days later they called and told us Killian had Down Syndrome. It was a huge shock. I cried for days. But most people were supportive and encouraging.

After a couple weeks of mourning the baby I thought we’d have, I realized he is still our baby and a gift! By our 22 week ultrasound, the cystic hygroma was gone! I continued to worry but I wish I knew then what I know now. There’s no need to worry!

I had a planned induction with Killian because of a history of fast labor. There was an extra nurse and a pediatrician ready for Killian’s arrival. When he was first born, he had some difficulties breathing because of a heart condition we later found out about. There were many stares and whispers from nurses, even though we had a prenatal diagnosis. But the OB treating me was phenomenal and encouraging.

Killian was taken right away to Children’s Hospital of Pittsburgh for further evaluation. Overall, the experience was difficult because I don’t think anyone knew what to say.

Bringing Killian home was just like bringing our oldest home! He spent two weeks in the NICU at Childrens Hospital before coming home. He came home with oxygen, which was a learning experience. But bringing him home to excited family and friends was a great feeling!

We’ve been blessed with a healthy kiddo. His heart healed without surgery, he’s only had surgery for his clogged tear ducts, and he takes one medication for his thyroid.

He started Early Intervention around 10 weeks old with physical therapy, occupational therapy, and developmental therapy! Once a little older he started with vision therapy (he has nystagmus) and speech. His therapists have become family.

He walks, climbs steps, dances, has a few words and signs, and for the most part feeds himself. He is ornery and gets into everything he can reach or climb onto!

Killian makes everyone around him happier! He lights up any bad day with his silly dances and adorable smile. He loves to give hugs and kisses. He’s no different than any other kid!

I worried a lot during my pregnancy about having someone around that understood what we were going through. Thankfully, a friend and old coworker has a daughter with Down Syndrome and eased a lot of our worry. But having Killian introduced us to a whole community of amazing people who have a loved one with DS (or have DS themselves!) that want to help and support each other! I’m forever thankful for those open arms during our late pregnancy and now.

We love going to the zoo, playing at the park, and going to see family that live away! We have traveled a lot in Killian’s two years, including to Disney, Myrtle Beach, and many road trips to see grandparents and other family. Killian is an easy car rider and loved the air plane rides!

Honestly, not nearly as much as I would have thought! We are quite busy with Killian’s therapies and many appointments. But it is worth it! He sees a special doctor, as well as his amazing pediatrician, that specializes in kids with DS! At the DS clinic they are amazing and love our kids as we do. Killian gets a lot of proactive testing, because kids with DS are more likely to have certain things like hearing loss, ear infections, etc. it’s a lot to take in and do, but I’m thankful we do!

It’s going to be ok! As cliche as that sounds, there’s no need to worry! Don’t be scared of the future. Embrace the differences that he will have because they’re beautiful and he is a true blessing to everyone he knows.

Congratulations and welcome to the family! This is going to be one of the best things to ever happen to you.